A very short but excellent lesson in Economics

A very clever reader in the New York Times has summed up the fundamental essence of economics as follows:


Brookhawk Maryland
In the end, the economy is about passing money around, from hundreds to millions of people to hundreds of millions of other people. The more people the money passes to and from, the more vibrant the economy. When the money begins to move largely into one group and fewer people have it to pass around, they pass it only to each other or don't pass it at all, and the economy withers and dies.
Why is this so hard to understand?

Posted by Victor Lyons at 18:11 No comments:

Adult literacy in the UK

I recently contacted the administrators of adult literacy departments of two London boroughs - Lambeth and Hammersmith & Fulham.  I offered my services as a literacy expert free, together with our program, ReadingWise English, to help them in their efforts to make adults literate in their boroughs.  I was terribly polite.  Both persons did not take up my offer.  I don't understand what's wrong with these people.

Posted by Victor Lyons at 13:17 No comments:

This is a tentative series of actions to take in a corrupt area.
The purpose is to begin to show actions that work, and actions that don't work.
We're starting from scratch here.
We can hopefully piggy-back on other development projects so there is minimal cost.

The theory is that by observing something, you change its behaviour.
This is a well known principle in quantum physics, but we are now trying to apply it to ethics.
We are going to perform a series of steps on a gradient, starting off with something very simple.

These steps involve the suspected person, and an observer.  The observer is employed by us for the purpose of this project.  They will have a "cover story".  Something like they are doing an independent monitoring project on behalf of a prestigious UK/US university.

Note that the suspected person will often be the bottom of a corrupt pile, and not our main target.  But we use them as a  conduit to their superiors.

Step A1a
Principle: Notice something is wrong, and be seen to be observing it.
Action: The observer with a clipboard wanders around silently. Preferably the observer is foreign.  A recent study in Bangalore found that Bangaloreans are 2.4 times more likely to learn something if the person imparting it is a foreigner.

Step A1b
As per #1a, but in addition to the clipboard, the observer wanders around with a recording device.  Note that most smartphones and tablets have recording apps.

Step A2
Principle: Notice something is wrong, and point it out to the person concerned.
Action:  The observer tells the suspected person that they will receive a copy of the report, but no one else will.

Step 3
As per step 2, but let the suspected person know that their superiors will be informed.

Step 4
As per step 3, but let the suspected person know that findings will be published widely.

In all the above, the suspected person is NOT informed beforehand about the presence of the observer.

Steps B1-B4
The above steps can and should be repeated where the suspected person and his seniors ARE informed beforehand that an independent observer will be present.

Posted by Victor Lyons at 13:10 No comments:


The latest statistics from the British Crime Survey show that every year in the UK more than 1 million women suffer domestic abuse, more than 300,000 are sexually assaulted and 60,000 are raped. But fewer than one in four people who suffer abuse by their partner and fewer than one in 10 women who experience serious sexual assault report it to the police.

Posted by Victor Lyons at 11:22 No comments:

Let's see - 400 million illiterates at $80 per head, that's $32 billion we'll charge to sort the illiteracy problem with Tara Akshar, as against $53 billion to NOT solve it.

That's $21 billion we can save the Indian economy right away!
Posted by Victor Lyons at 04:19 No comments:

The problem with Indian Universities


Even those who make it through accredited universities are often not ready for employment, according to educators at Infosys and ICICI Bank Ltd., the country's second-biggest lender. K. Ramkumar, executive director at ICICI said most university curricula and teaching methods are out of date.

"It is not application-based teaching, it is purely memory based," he said. "You mug the paper and answer 20 questions and get the marks. The trouble is, when they come to ICICI or any other company, they aren't able to recall any of that knowledge."

In this week's excellent leader from India Today magazine, it says:


It is estimated that in a decade from now, in 2022, there will be a demand for 500 million skilled workers whereas the supply will only be 122 million.

That's why ReadingWise is in the skills education business!

I met a very smart chap this week who is a senior executive in a major learning company.  He believes that if you make good learning content available, people will learn it.
Ha ha, such naive optimism, I say!  My Uncle Arnold read the whole Encyclopedia Britannica twice, and it did not make him any smarter.  It just made for endless dinner conversations full of trivia.
I know a billionaire who has put a lot of money into providing the whole secondary school curriculum online.  He thinks this will solve the education problems of India.  I think his effort has been misplaced.
What they are all missing is that PROCESS is king.  The process by which one learns has to be the best available.  I think that there is no point in having content unless you teach learning processes so students learn effectively - how to retain, how to apply.  Which of course is why everyone should do our study skills course MemoryWise!
Posted by Victor Lyons at 20:27 No comments:

I've changed my mind about the best approach to tackling corruption

This week I had an excellent conversation with an Indian state senior civil servant (called a Secretary here in India) about corruption.
I have always been of the opinion that the offices of law and order have to take care of corruption at the top of the pyramid, but it behoves us NGO people to find effective ways to bring about behaviour change at the bottom of the pyramid.
(The pyramid is that representation of the economic situation where the haves sit at the top and the have-nots sit at the bottom, and people are usually trying to climb higher in the pyramid no matter where they are.)
Mr Secretary said that the people at the bottom of the pyramid cheat usually because they have to.  They have such low income that in order to feed their families, they have to be corrupt.  They have an almost altruistic motivation to do so.  A typical case is the cop who executes fines in the form of cash payments that go into his own pocket.
The best case entrance point (as we say in therapy language) is to address bureaucrats in the middle of the pyramid.  These are people who don't need to cheat - they have a good income and a good pension and good working conditions, and risk their whole careers in the cause of greed.  They siphon public money into their own pockets, sometimes in vast quantities.  They prevent the implementation of audit measures that would prevent this happening.
Mr Secretary thinks it should be possible to reduce this kind of corruption by a kind of preventative education program. It would be what they call in some countries a value education course.  I think he might be right, it should make a difference.  The difficulty would be setting up the RCT (Random Control Trial) to prove it worked!  However, I'm up for the challenge.  I've agreed to write the program, and he's happy to pilot it, so let's see if it works out.

Posted by Victor Lyons at 20:14 No comments:

Dominic Lawson wrote something extrememly important in the (London) Sunday Times last November (which I forgot to post then.)
http://www.thesundaytimes.co.uk/sto/comment/columns/dominiclawson/article804443.ece


With the possible (and brutal) exception of China, the UN population division’s own figures demonstrate that in countries where fertility rates have fallen markedly there has been no great difference in the rate of decline whether governments have promoted birth control or not. There are only two statistically water-tight correlations: fertility rates fall almost exactly as female literacy rises; and the more urbanised a country becomes, the smaller is the average family.

Posted by Victor Lyons at 17:06 No comments:

Memo to self:
I'm designing a large rollout of learning software on Reliance 3G Android tablets in India.
Must remember to check the breakdown rate.
Last time we rolled out 300 laptops, they were Lenovo and the maintenance/breakdown system wasn't too bad.  We want to avoid the following.  (Excerpt from Educational Technology Debate newsletter)

Wayan - Technology and Child Development: Evidence from One Laptop per Child Program in PeruMar 08, 2012 06:19 pm | Wayan
The report says that 13% of XO laptops in Peru malfunctioned at some point, and about half of them were successfully repaired. Yet in Uruguay, which has a much more efficient XO laptop maintenance and repair system, still had 27% of the XOs under repair at any given time. This makes me think that either children in Peru are much more careful with their XO laptops, or they are using them significantly less than in Uruguay.

Posted by Victor Lyons at 17:02 No comments:

OLPC study reiterates - technology is not the solution, pedagogy is

So far, the IDB has issued two synopsis examining the academic achievement and impacts on cognitive skills that XO laptops facilitated in a 15-month randomized control trial with 21,000 students in 319 schools – an initial report in 2010, and a second reportearlier this year. The summary findings should not be a surprise to EduTechDebate readers: 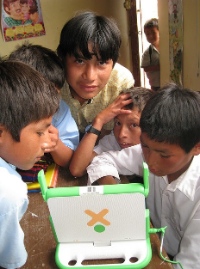 The effective implementation of the “One Laptop per Child” program was not enough to overcome the difficulties of a design that places its trust in the role of technologies themselves. The use of technologies in education is not a magic and rapid solution through which educational problems and challenges can be solved with the simple acquisition of technological devices and systems.

The IDB did find some positive and significant results in cognitive ability – a five-month lead over non-XO students – but no overall significant differences were found on Mathematics and Language standardized tests 15 months after the implementation.
Posted by Victor Lyons at 18:30 No comments:

It says in the Guardian today that:

If you do plateau [in your weight loss], check that you're sticking to your plan and whether your goal is unrealistic. The ongoing National Weight Control Registry in America is the largest study of long term successful weight loss ... It finds that people who manage to keep weight off eat breakfast, weigh themselves once a week, watch less than 10 hours of television a week and exercise about an hour a day. If you do all of those things as well as cut your calorie intake, you won't need to measure if your diet is working or not. You'll know that it is.

At least I eat breakfast.

Posted by Victor Lyons at 04:05 No comments:

By Simon Jenkins in The Guardian:
http://www.guardian.co.uk/commentisfree/2012/feb/23/adele-ilk-rhetoric


Research apparently shows that most audiences can recall little beyond the first five minutes of any talk. The brain simply shuts up shop, to await that ever-exhilarating phrase "and now finally". Listeners know this, yet they forget it when they become speakers. Probably the most famous speech in history, Lincoln's Gettysburg address, had just 10 sentences and 272 words. It followed a two-hour speech by a man called Everett, which no one remembers.

Posted by Victor Lyons at 03:03 No comments:

Victor Lyons
About a billion people lead lives of misery for various reasons. I work in three fields that cause probably the most misery - illiteracy, unemployability and PTSD/depression. I invent programs to ameliorate these conditions, and then find people to execute them.